The Lake District is a mountainous region in North West England. It is famous for its lakes, forests, and mountains. In 2017, it was designated a UNESCO World Heritage Site. 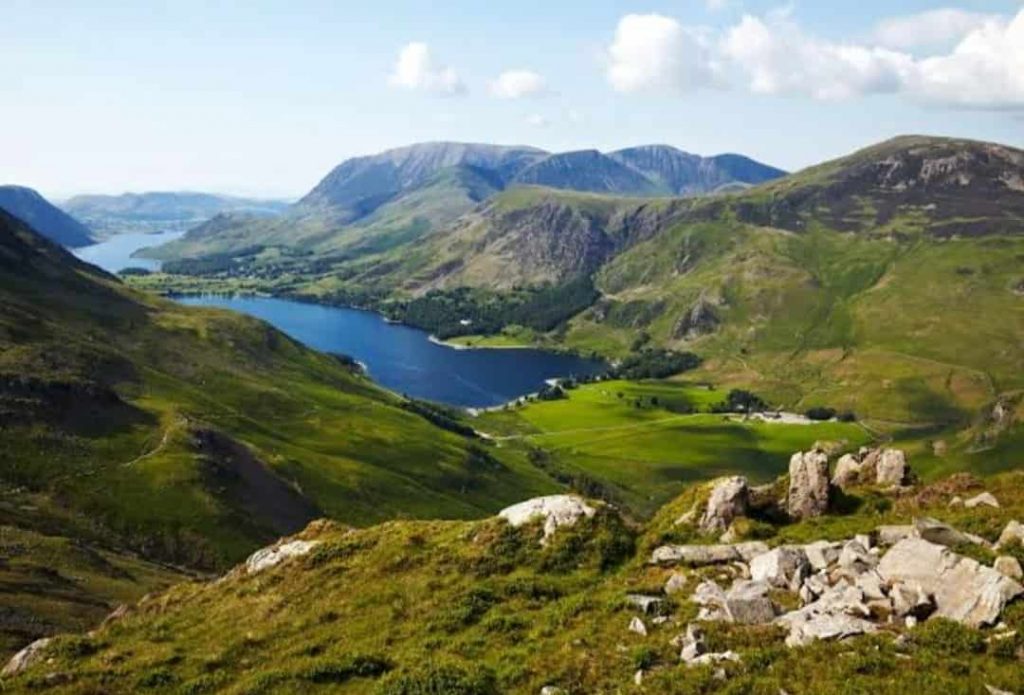 It also contains the most profound and largest natural lakes in England. Lake District National Park includes all of the central Lake District, through the town of Kendal. It is the most visited national park in the United Kingdom. There is some ancient woodland in the National Park.

Windermere Lake is the largest natural lake in England. The lake is more than 11 miles (18 km) in length, and almost 1 mile (1.5 km) at its widest, it is a ribbon lake formed in a glacial trough after the retreat of ice at the start of the current interglacial period. 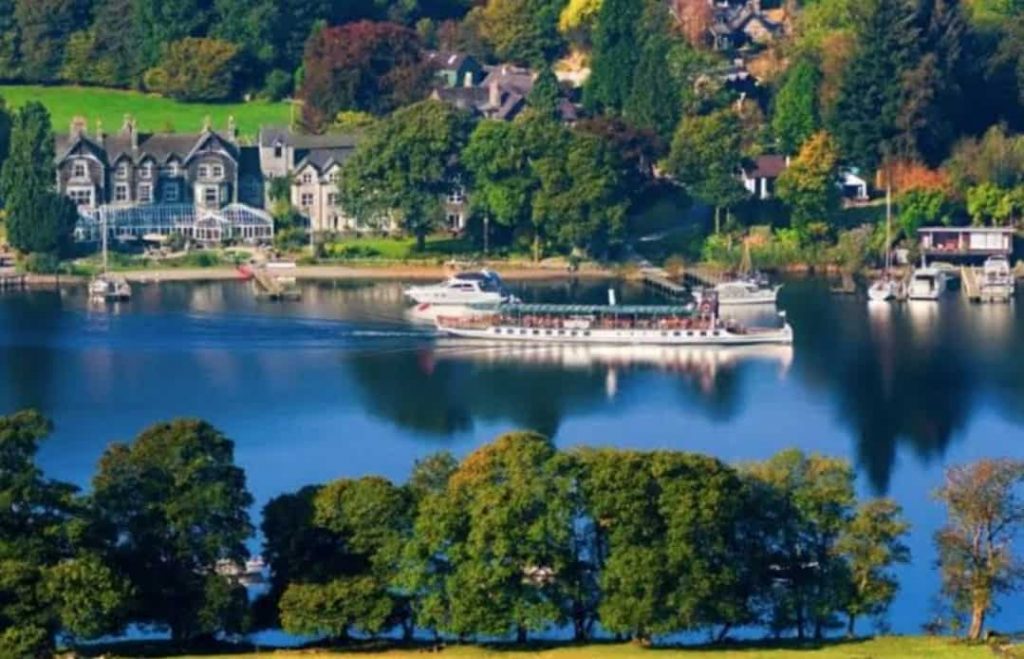 There are five large boating clubs based around the lake South Windermere Sailing Club, Windermere Motor Boat Racing Club, the Lake District Boat Club, the Royal Windermere Yacht Club, and the Windermere Cruising Association. It has been one of the country’s most popular places. The lake is drained from its southernmost point by the River Leven. It is one of the most popular tourist destinations in England.

Bamburgh Castle is a castle on the northeast coast of England, by the village of Bamburgh in Northumberland. Air quality levels at Bamburgh Castle are excellent due to the absence of industrial sources in the region. 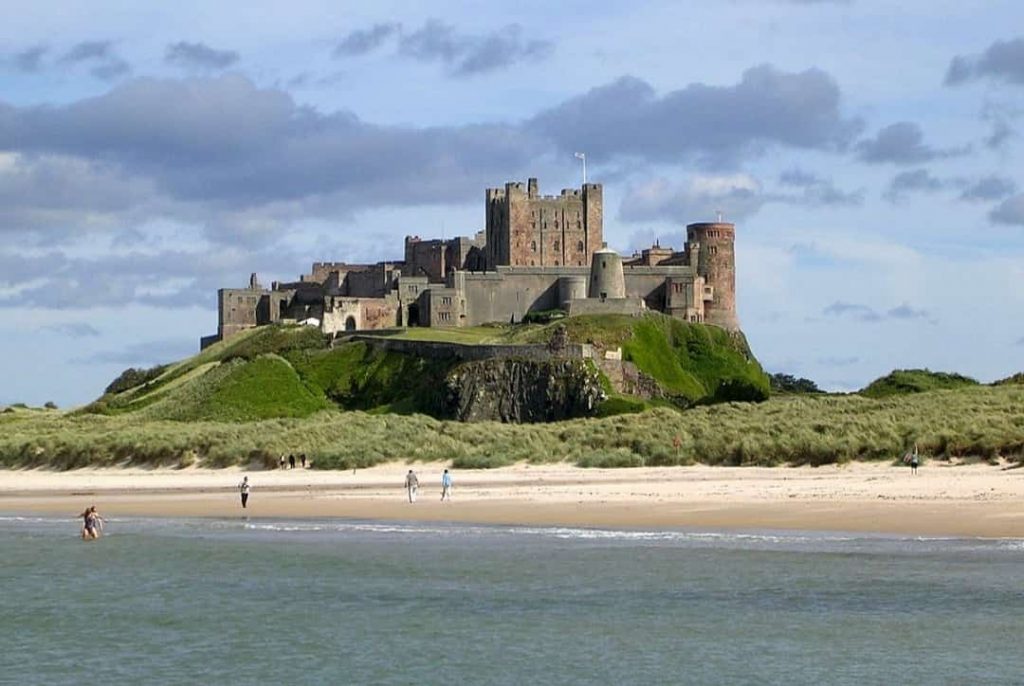 It was rebuilt by the Normans and restored during Victorian times. The castle still belongs to the Armstrong family and is open to the public. It is one of the most important Anglo-Saxon archaeological sites in the world. The castle’s laundry rooms feature the Armstrong and Aviation Artefacts Museum. Apart from that, the museum houses a collection of extraordinary finds including the intricate, gold Bamburgh Beast and a rare pattern welded sword, reinforcing Bamburgh’s importance as an Anglo-Saxon citadel. It is one of the star attractions of many books on castles.

The Cotswolds is a region in central-southwest England, along a range of rolling hills that rise from the meadows of the upper Thames to an escarpment above the Severn Valley and Evesham Vale. 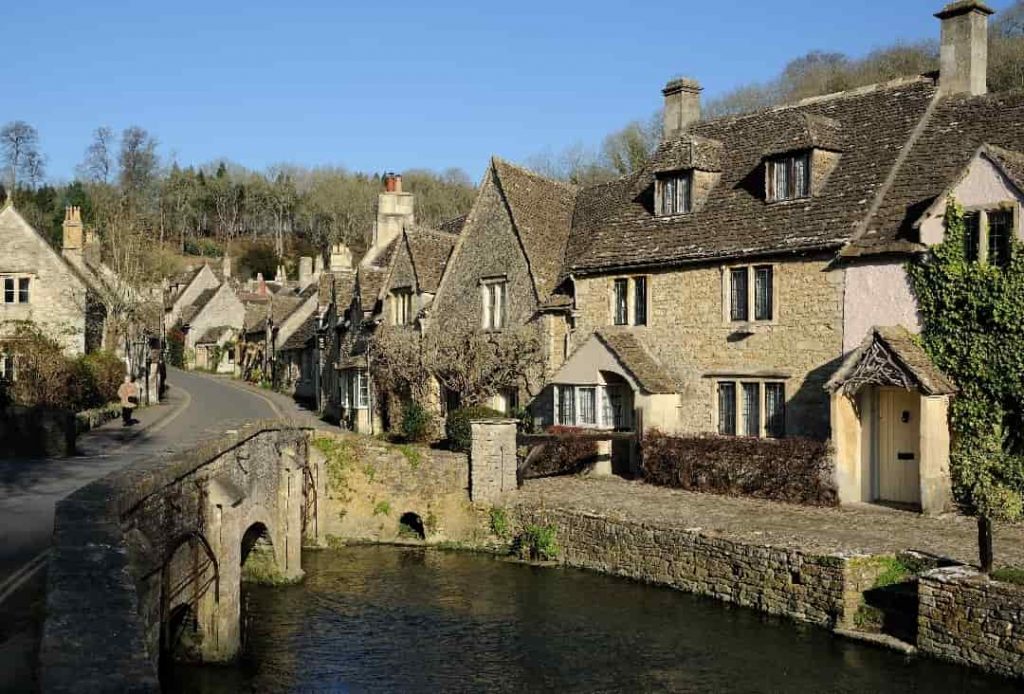 In 1966, it was designated as an Area of Outstanding Natural Beauty (AONB). The area is defined by the bedrock of Jurassic limestone that creates a type of grassland habitat rare in the UK and that is quarried for the golden-colored Cotswold stone. This limestone is rich in fossils, particularly of fossilized sea urchins. The highest point of the region is Cleeve Hill at 1,083 ft (330 m). The name Cotswold has popularly attributed the meaning “sheep enclosure in rolling hillsides”. Tourism is a significant part of the economy. The area also has numerous public walking trails and footpaths that attract visitors. It is one of the popular locations for filming scenes for movies and television programs.

Royal Pavilion is a Grade I listed royal residence located in Brighton, England. It is built in the Indo-Saracenic style prevalent in India. 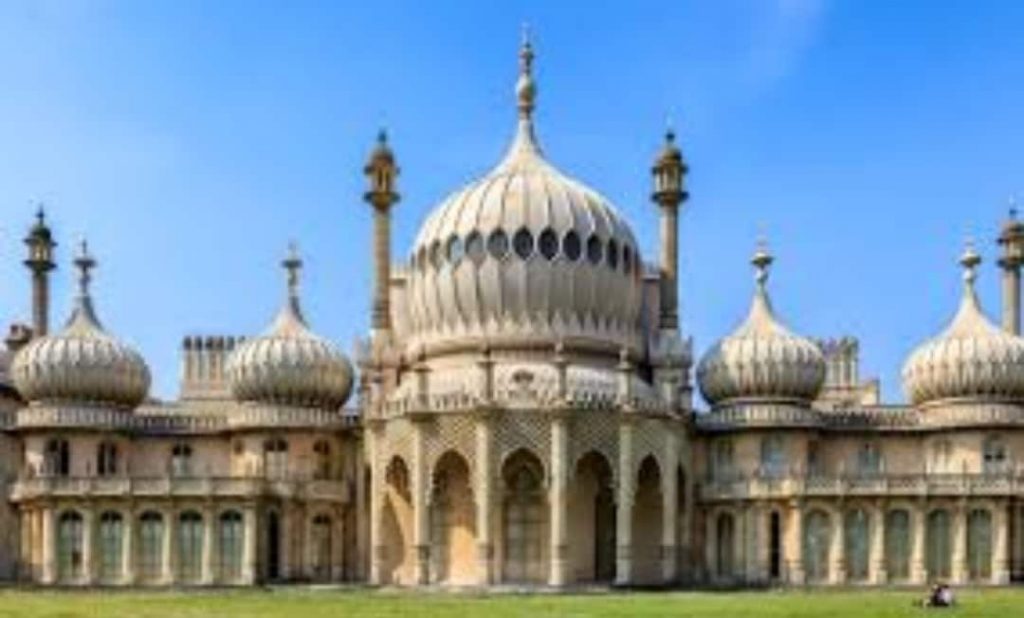 The current appearance of the Pavilion, with its domes and minarets, is the work of architect “John Nash”. The Royal Pavilion Garden, on the Pavilion’s grounds, has a wide variety of plants. It is said to be the only fully restored Regency garden in the UK. The garden is maintained using only organic methods by the Trust’s garden team led by a Head gardener. The garden is Grade II listed in the Register of Historic Parks and Gardens. More than 4 lakh people visit the Royal Pavilion annually. It is one of the most popular tourist destinations in England. The palace is striking in the middle of Brighton, for its unique Indo-Islamic exterior.

Rye is a small town and civil parish in the Rother district, in East Sussex, England. Rye stands at the point where the sandstone highland of the Weald reaches the coast.

Since the Second World War, the town has become a center for ceramics. Rye Castle Museum is located on two sites, on East Street and at the Ypres Castle. It also stands at the center of a network of nature reserves, some of the national importance. In 2014, a BBC adaptation of Mapp and Lucia was filmed in Rye. It has a small fishing fleet, and Rye Harbour has facilities for yachts and other vessels. Several long-distance footpaths can be joined by walkers in the town. Rye is one of the most popular tourist destinations in England.

Kynance Cove is a cove on the eastern side of Mount’s Bay, Cornwall, England. It is situated on the Lizard peninsula approximately two miles (3 km) north of Lizard Point. 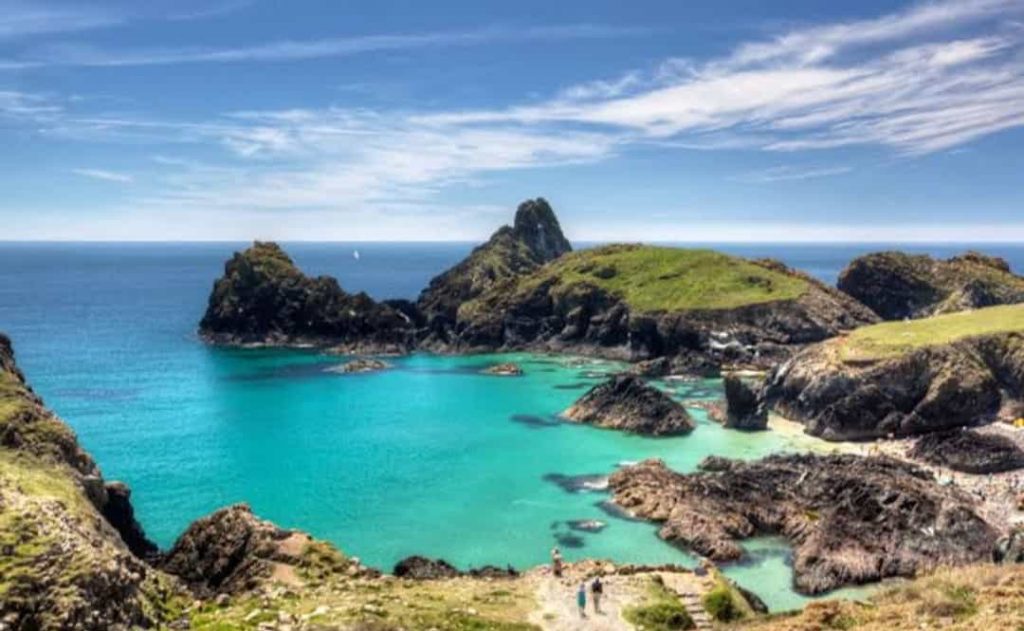 The BBC has described Kynance Cove as one of the most beautiful stretches of coastline in the South West. Kynance Cove and the surrounding coast are owned and managed by the National Trust. There are a number of small tidal islands and stacks within Kynance Cove that were formed because the tremolite serpentine was broken into blocks and invaded by other types of rock, including granite and basalt. It is also used as a location for the TV series ‘Poldark’. The stunning beach, with its secret caves and islands, gives the feeling of heaven. 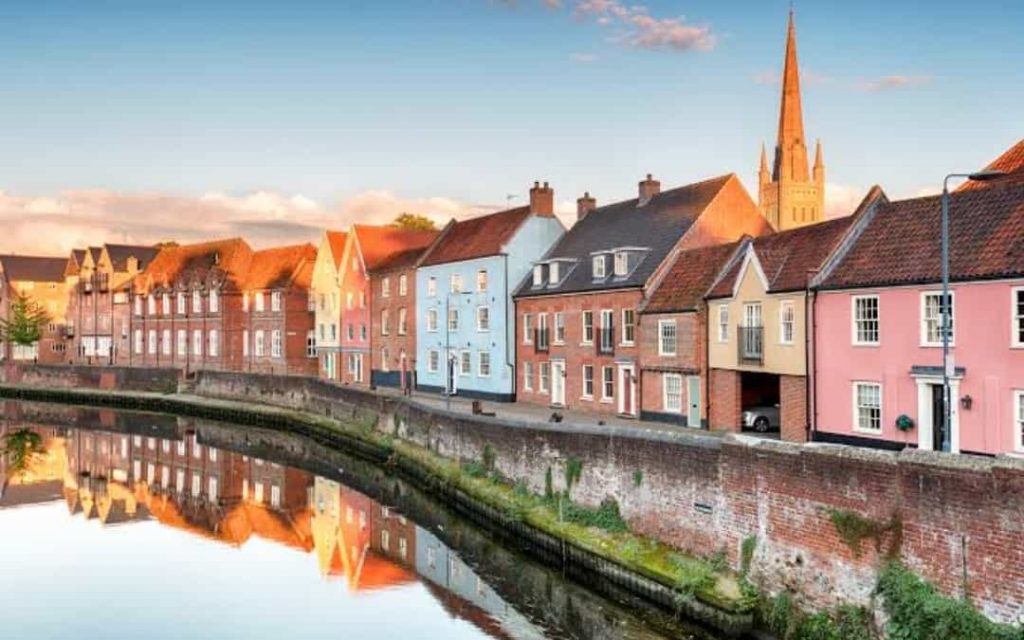 Norwich claims to be the most complete medieval city in the United Kingdom. In May 2012, Norwich was designated England’s first UNESCO City of Literature. It was voted one of the “Best Places To Live” in the UK by ‘The Sunday Times’ in 2020. Apart from that, it was voted the “Happiest City To Work in the UK” by ‘The Guardian’. The popular sports played in Norwich are Boxing, Baseball, and Football. The city has 23 parks, 95 open spaces, and 59 natural areas managed by the local authority.

High Force is a waterfall on the River Tees, near Middleton-in-Teesdale, Teesdale, England. The waterfall is within the North Pennines Area of Outstanding Natural Beauty (AONB) and the European Geopark. 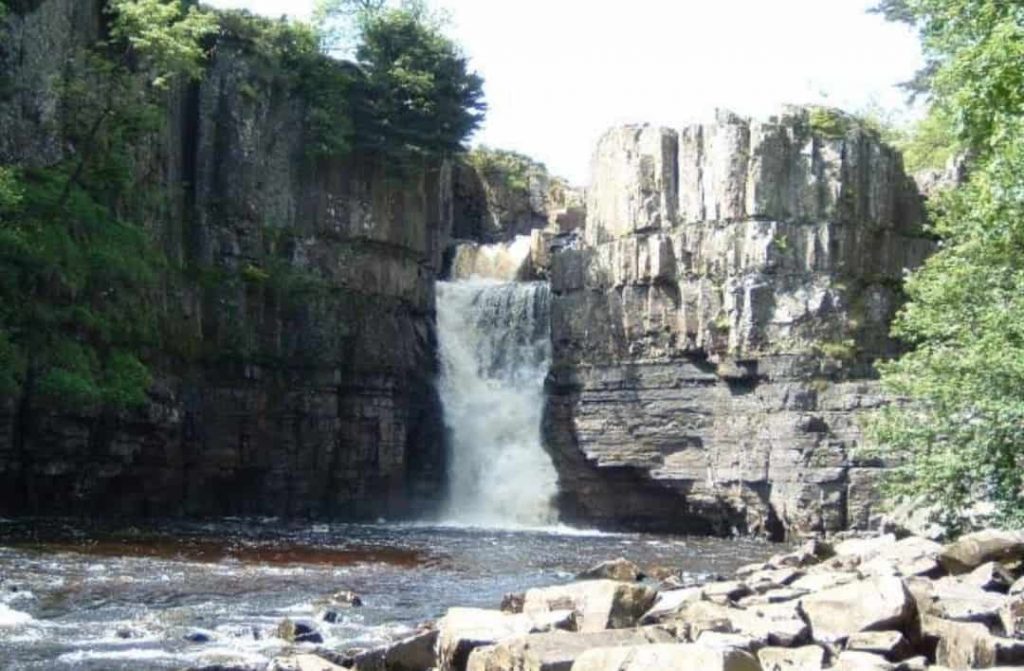 It is part of the historic county boundary between the North Riding of Yorkshire on the south bank, and County Durham on the north bank. The waterfall itself consists of three different types of rock. The upper band is made up of whinstone, or dolerite, and a lower section is made up of Carboniferous Limestone, a softer rock that is more easily worn away by the waterfall. Between these two layers, there is a thinner layer of Carboniferous sandstone. The popular painter “J. M. W. Turner” has sketched the scene of the High Force waterfall. It is one of the most spectacular and beautiful places in the world.

Durdle Door is a natural limestone arch on the Jurassic Coast near Lulworth in Dorset, England. The arch has formed on a concordant coastline where bands of rock run parallel to the shoreline. 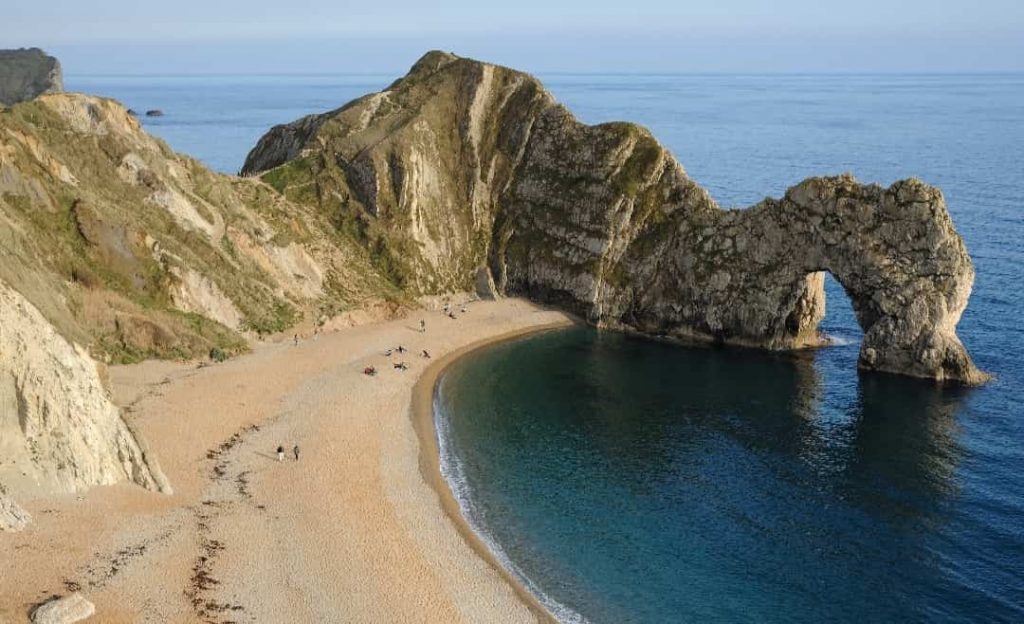 The rock strata are almost vertical, and the bands of rock are quite narrow. The landscape around Durdle Door has been used in the films like ‘Wilde’, ‘Nanny McPhee’, and ‘Housefull 3’. UNESCO teams monitor the condition of both the arch and the adjacent beach. Durdle Door is one of the most iconic landscapes. It is the most famous stone arch in the world. There are many popular artists who have sketched the scene of the Durdle Door.